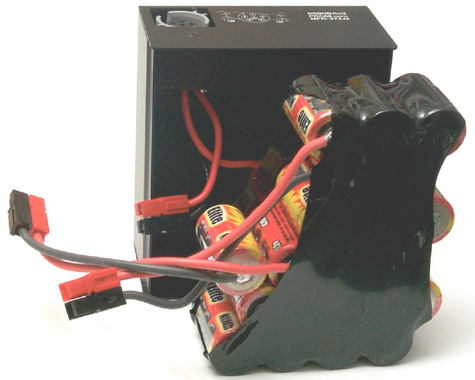 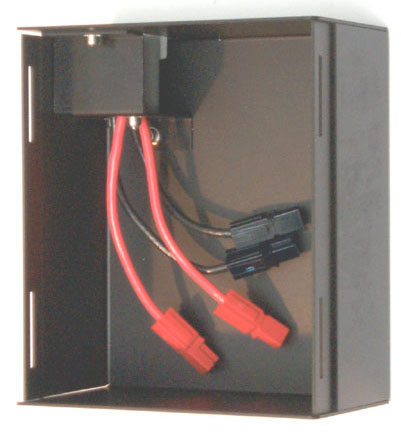 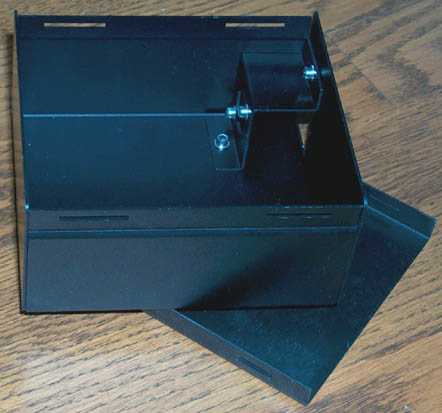 This is the second battery adapter made for the BA-5590/U family of military batteries.  The battery consists of two independent "12 volt" batteries and the load can be wired to connect them either in series for a "24 volt" battery or in parallel for a "12 volt" battery.  The first 5590BA battery adapter was designed using 0.060" thick aluminum.  And these was no planning for the use of Sub C cells so it's difficult to get 20 SC cells into the first version.  Version 2 holds 20 SC cells close packed with a little extra room on all sides.

The lid attach method on the first version depended on bending parts of the lid inward to act as fingers that mate with slots on the sides of the main box.  The combination of the stiffness of the 0.060" aluminum and the length of the fingers made it difficult to remove the lid.   Version 2 uses 0.050" aluminum so the sides are more flexible and the inward pointing fingers have been replaced with what's called a lance.  This is similar to a punch that moves the metal about it's own thickness and leaves the punched metal attached.  Thus the new  "fingers" are much shorter making for easy lid installation.

30 April 2008 - top photo (above) shows 12 AWG wires with crimped connections.  The wire is super flex, i.e. there's a large number of very fine wires, not the stranding like used for house wiring.  They measure 1 milli Ohm each including the Power Pole terminal and the socket pin.  For more see the HP 4328A Milliohmmeter web page.

The adapter without any batteries weighs about 9 oz.

Inside Dimension Comparison Ver 1 vs. Ver 2

28 Oct 2007 - Boxes back from laser marking.  A pair of power pole connectors will pass through the wire clearance hole below the socket.  If there is enough slack in the battery pack wires they could be threaded through the hole one pair at a time then coupled into a 4 terminal block.  The blue support blocks could then be used to anchor the block of connectors to the existing bracket which would need a couple of holes drilled and a spacer between the connector block and the bracket.

The photo shows a two pair of Power Pole connectors where each pair is the ARES standard configuration, but they are stacked.  That way you could plug in two independent "12 volt" ARES loads or make a jumper cable to get 24 volts.  For some ham radio applications the high current output would support short transmissions where high current is needed. 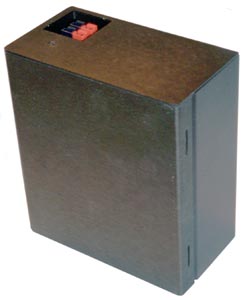 The SC cells used in RC racing cars have the ability to run at (30 Amps 2006 (2008 40 Amps) so an option for this battery adapter may be (idea stage) to use a different socket bracket to support Anderson Power Products "Power Pole" connectors using contacts rated for 45 Amps.

Twenty SC cells in series would have a voltage of about 24.0 when empty and with a current of 30 amps would be delivering 720 watts!  The parallel configuration would be 12 volts at 60 amps for 720 watts!

That's a lot of power.

To support the Power Pole high current idea the internal wires need to be 14 ga or larger.
15 Oct 2007 - A sample of 14 ga wire is on order to see if it will fit the connector pin solder cup (the dimensions say it's a little too big).

If the regular socket is used it makes sense to use the heavy wire to minimize IR drop even when lighter loads are being powered.
The problem is soldering the wire.  Extremely difficult.  The solution is to crimp the 14 AWG wire into the brass connector pin.

14 May 2008 Charging and discharging to see if capacity improves (what I was told).

The Triton2 charger can charge all 20 cells in series.  The wires on the battery pack do not have the Power Pole connectors impermanently paired up so they can easily be connected in series.  But the Triton2 has a charging power limit of 90 Watts so for a 28 Volt pack the current can only get to 3.2 Amps (which is what's shown in the photo at left) even though the set current was 4.0 Amps.  The set current would be used if the pack voltage was below 22.5 Volts.

In a similar manner the discharge is limited to 20 Watts, which for a 28 volt pack is only 0.7 Amps, not really enough to do much.  By load testing the two sides separately that can be doubled to 1.4 Amps, but still short of a realistic load.

You can see the thermal sensor plugged between the pack shrink wrap and the center cells.  So far it has not terminated charging but is a safety backup.

That's equivalent of over 17 Amp Hours although these cells are rated 4.7 AH.  Compared to the 40 Amp loads they are designed to deliver the radio loads are much lighter, increasing the Amp Hour capacity.

2 May 2008 - The pack can be ordered from Cheap Battery Packs soon with a predefined configuration.
20 Elite 4 AH cells, copper bars, 14 AWG wire PRC68 configuration less than $150 including shipping to California YMMV
20 cells * 4 AH/cell * 1.2V discharged = 96 WH, at 1.3 Volts average maybe 104 WH so around 100 WH capacity.  These cells are rated to discharge 40 Amps.
That's 40A * >24V >= 960 Watts.  But the 5590 type connector can not support 40 Amps for very long.  An option would be to replace the 5590 socket with Power Pole connectors.
If the discharge rate was 1,000 Watts and the capacity is 100 WH then the time would be 0.1 hours or 6 minutes.  That's way too long for the 5590 connector would not take it.
When used in a radio the advantage is that the voltage drop during transmit will be lower than with a higher resistance battery and so you get more talk time in transmit.

11 Nov 2007 - The reason for my current focus on the high current performance is not so much that the load would be drawing huge currents all the time, but on the need to be able to supply a current higher than the average current for short periods of time.  Many devices have a startup power requirement that's considerably higher than their run current.  If the battery can not supply the starting power then it can't power the equipment.  Also by designing for the higher currents resistive losses are lowered for the lower currents.

1 Nov 2007 - The 20 SC pack made for the first version 5590BA has been refitted with 14 AWG wire and Power Pole connectors with 45 Amp contacts.  It drops right into the 5590BAv2.
A Triton2 Charger Discharger Cycler is being used to get this pack up and running since it's been sitting for many months.  The discharger can be used to evaluate how well another charger works with a limit of 3 Amps max.  The Amrel EL1132 can handle 300 watts, which at 28 Volts is a little over 10 Amp discharge current.  Testing at 30 Amps from 30 Volts requires a resistor of about 0.9 Ohms that's good for about 900 Watts.  Not easy to come by.

9 Nov 2007 - The test was done using the Power Pole connectors on the battery pack, not using the 5590BA socket that's probably rated for only 10 Amps.  Two sides connected in series.
Note 1 - The EL1132 is rated for 300 Watts and at 337 Watts it started making beeping sounds, so no higher currents were tested.  The limitation is the tester, not the battey.

Note 1 - The EL1132 is rated for 300 Watts and at 361 Watts it started making beeping sounds, so no higher currents were tested.  The limitation is the tester, not the battey.


This is probably because the 4.6 Ah rating was at much higher currents (up to 10C).

None of the extra top contacts are needed for a BB-2590 since it has internal protection against over charge and over discharge as well as over temperature.  But I don't think the BB-2590 has any call balancing capability.
So the ideal battery pack may consist of 24 cells of 18650 size with the highest AH capacity (the high discharge current cells (2016: up to 30 Amps) that are used for electrical vehicles, like the Tesla line of cars, are not needed for this application since the loads are under 10 Amps and more typically under 3 Amps.

Table based on user made battery pack.  i.e. neither labor to make pack included nor cost of misc links, connectors, wire, etc.


The 5590BAv2 may be sold as the box with secondary style socket terminated with short super flex 16 AWG wires terminated with a pair of 45 Amp rated Power Pole connectors (4 terminals) in standard ARES configuration.  And also offer optional battery packs.

Packs are made using either spot welding or soldered copper link bars.  The table above shows only a few of the SC cells that are on the market.  Since the 0.9" diameter cells easily fit ver 2 commercial packs can be made without custom fitting.  The SC pack I made for version 1 just drops in with room to spare.

This would be an adapter that can hold 40 AA cells.  It allows the use of Alkaline, Ni-Cad, Ni-MH, LiFeS4 (Energizer L91 1.5 volt Lithium), Sanyo eneloop Ready To Use (long shelf life) Ni-MH, or whatever new chemistry comes out in the future.  AA cells typically are where the newest technology shows up first.  Short wire leads with Power Pole connectors.  A string of 10 cells gives 15 volts so 20 cells is the number needed for the two sides to the 5590 family battery.  So you could install just 20 cells or for more capacity install all 40.

I'm investigating the eneloop Ready To Use Sayno AA cells.  They claim a much longer shelf life than other Ni-MH cells.  This is being done with a Maha C9000.